What Is the Horizontal Gaze Nystagmus Test in a DUI Traffic Stop? 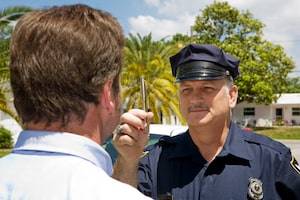 The Horizontal Gaze Nystagmus (HGN) Test is an eye test done by a police officer on someone suspected of DUI. Nystagmus is an involuntary jerking of the eye. A federal government agency called the National Highway Traffic Safety Administration (NHTSA) developed the rules and procedures for “standardized” field sobriety testing. The HGN Test is typically the first standardized field sobriety test given by a police officer to someone suspected of a DUI.

Police officers are looking for three “clues” in each of your eyes during the HGN test, for a total of six possible “clues”. The first set of clues relate to “the lack of smooth pursuit.” The lack of smooth pursuit can be best compared to having the windshield wipers on for a car when it is not raining. As the windshield wipers will sort of skid and bounce, the person’s eyes may do the same if there is a “lack of smooth pursuit.” The second set of clues relate to distinct and sustained nystagmus at maximum deviation. For distinct and sustained nystagmus at maximum deviation, the police officer will place the stimulus all the way to one side of someone’s face so that there is no space in between the eyeball and white of their eye. When someone has consumed alcohol, the eyes will bounce in this maximum range looking off to the side when the police officer has kept their stimulus in one place for four or more seconds. The last set of clues relate to “onset of nystagmus prior to 45 degrees.”  Onset of nystagmus prior to 45 degrees involves the officer moving the stimulus slowly to see if the person’s eyes start bouncing before an imaginary 45 degree angle is finished.

The standards set forth by NHTSA MUST be followed when an officer performs the HGN test, or it may be inadmissible in court. For evidence purposes in Illinois, the government can only argue that a “failure” of the HGN test means that someone may have consumed alcohol. This is a result from a successful appeal to the Illinois Supreme Court handled by our office!

There are other possible causes of “nystagmus” or even clues appearing on the HGN test. Contact a knowledgeable Wheaton DUI defense attorney today to discuss the ins and outs of the HGN test!