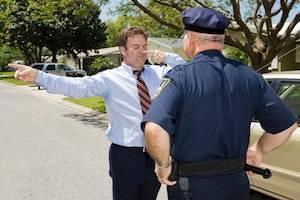 Imagine a world without standardization. What if Illinois posted its speed limits on roads strictly in metric terms and Indiana in standard ones? What if each of the fifty states had its own unique form of currency?

To prevent unequal application of field sobriety tests across these United States, the federal government, through its administrative agency the United States Department of Transportation, promulgated uniform tests known colloquially as the HGN, WAT, and OLS. The idea is to make sure everyone in the country gets the identical testing and it does not vary from city to city, state to state, or region to region.

Thus, if anyone attempts to offer a field sobriety test that is anything other than the official standardized ones, they are per se invalid no matter what an officer may tell you. These invalid variants can be saying the alphabet backwards, closing your eyes and touching the tip of your nose with an index finger, or any other crazy thing some lawman can make up. The point is, unless the test is from the United States Department of Transportation promulgated battery of tests, they are invalid.

WE ARE NOT, HOWEVER, GIVING YOU SPECIFIC LEGAL ADVICE OR ENCOURAGING YOU TO REFUSE POLICE INSTRUCTIONS OR ORDERS! If you have been arrested, don’t try to wonder what part of your arrest comports with the correct laws and regulations, CALL YOUR WHEATON DUI DEFENSE TEAM AT RAMSELL & ASSOCIATES at 630-665-8780 IMMEDIATELY FOR A FREE, NO OBLIGATION ATTORNEY CONSULTATION!