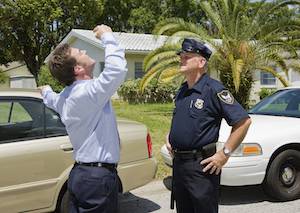 Those of us of a certain vintage can remember old depictions of DUI investigations such as from United States Department of Transportation public service shorts featuring the likes of actor Dana Andrews and from TV and the movies where lawmen seemingly decided a driver’s sobriety by made up and widely different on the spot tests.

To avoid this scenario of different tests and presumably different results, field sobriety tests for alcohol have been standardized nationwide into the basic three: horizontal gaze nystagmus, nine step walk and turn, and one leg stand. Thus, if an officer deviates from the standard tests and asks you to close your eyes, tilt your head back, and touch the tip of your nose with each of your index fingers, that is a per se invalid test, as it is not among the standard three. Likewise, if a policeman asks you to recite the Gettysburg Address or the alphabet backwards, those too are per se invalid. Even if in haste, you tell the policeman, “Take me drunk ossifer, I’m home!” relying on that alone to judge a man impaired by alcohol would be a deviation from the standard tests and invalid.

Regardless, these nonstandard tests can, in some instances, be used as persuasive but not controlling evidence of impairment, so do not rack your brain trying to figure out if your arrest was standard versus atypical, call the Wheaton DUI defense professionals at Ramsell & Associates LLC and come in immediately for your free, no obligation attorney consultation!